The Wizard of Oz: Judy Garland 100 Years Over The Rainbow

Adapted from L. Frank Baum’s timeless children’s tale about a Kansas girl’s journey over the rainbow, The Wizard of Oz opened at Grauman’s Chinese Theater on August 15, 1939. The film was directed by Victor Fleming (who that same year directed ‘Gone With the Wind’), produced by Mervyn LeRoy, and scored by Herbert Stothart, with music and lyrics by Harold Arlen and E.Y. Harburg. Dorothy™ was portrayed by a 4'11" sixteen-year-old girl who quickly earned her reputation as “the world’s greatest entertainer”— Judy Garland. Ray Bolger appeared as the Scarecrow™; Bert Lahr as the Cowardly lion™, Jack Haley as the Tin Man™. Frank Morgan was seen in six different roles, including that of the wonderful “Wizard of OzTM" himself. 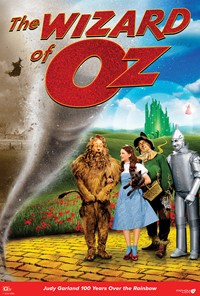