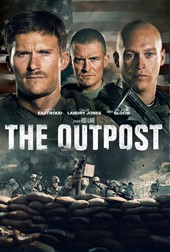 Based on true events, in this military thriller, a small unit of U.S. soldiers, alone at the remote Combat Outpost Keating, located deep in the valley of three mountains in Afghanistan, battles to defend against an overwhelming force of Taliban fighters in a coordinated attack. The Battle of Kamdesh, as it was known, was the bloodiest American engagement of the Afghan War in 2009 and Bravo Troop 3-61 CAV became one of the most decorated units of the 19-year conflict. The Outpost is based on The New York Times best-selling non-fiction book, The Outpost: An Untold Story of American Valor from CNN’s Jake Tapper. Directed by award-winning filmmaker Rod Lurie (The Contender, The Last Castle) and adapted by Oscar-nominated screenwriting duo Paul Tamasy and Eric Johnson (The Fighter) the film stars Scott Eastwood, Caleb Landry Jones, Orlando Bloom, Jack Kesy, Taylor John Smith, Jacob Scipio, and Milo Gibson. Three troops who fought at COP Keating appear in the film including Medal of Honor recipient Ty Carter (whom Caleb Landry Jones portrays.)