Produced by Deidox Films in collaboration with LifeWay Films and directed by Brent Gudgel and Chris Sinclair, “Free Burma Rangers” documents David and his wife Karen as they move to Myanmar during the height of its civil war with one mission in mind: to free the oppressed and rescue victims. David began training ethnic groups to conduct rescue missions to help those in need, while indigenous medics set up medical clinics and Karen developed children’s programs. Soon, the indigenous leaders asked if David would train teams for them, and in 1997, the Free Burma Rangers were officially founded. More than two decades later, the Eubank family continues to serve oppressed people in the Middle East. They have raised three children in Myanmar, and the Free Burma Rangers have today trained more than 4,500 members and helped more than 1.5 million displaced individuals. 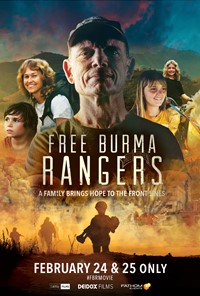