By all accounts, it was a movie that beat all odds: Surviving a set fire, the loss of a powerful director, and a studio that didn’t understand what it had, “Galaxy Quest” turned into a pop-culture phenomenon that would “never give up, never surrender.” As the cult classic nears its 20th anniversary – premiering on December 25, 1999 – “Never Surrender: A Galaxy Quest Documentary” explores how the science-fiction comedy became an enduring fan favorite, a movie that helped launch the sci-fi- and fantasy-driven movie and TV industry that dominates global entertainment today. On November 26 only, Fathom Events and Fandom present the theatrical premiere of “Never Surrender: A Galaxy Quest Documentary,” which includes exclusive behind-the-scenes footage and a 10-minute introduction featuring the cast members of ScreenJunkies. 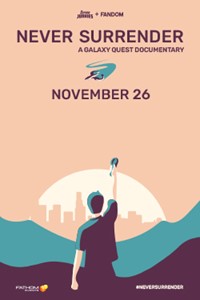