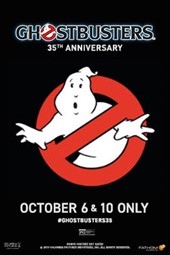 Paranormal activity never looked as good, or as funny, as it did in the summer of 1984, when “Ghostbusters” became a pop-culture phenomenon – and 35 years later, Fathom Events is giving movie fans a chance to get slimed again, but for two nights only: Sunday, October 6, and Thursday, October 10. While the Stay-Puft Marshmallow Man will remain safely at a distance, this special 35th anniversary presentation of “Ghostbusters” will feature an introduction that reunites key members of the cast of this iconic film, sharing the memories of making a film that remains a cultural touchstone. The introduction will also include newly unearthed and rarely seen alternate takes from famous scenes.