BTS WORLD TOUR 'LOVE YOURSELF : SPEAK YOURSELF' [THE FINAL]

The “LOVE YOURSELF” tour started in August 2018, and the world stadium tour “LOVE YOURSELF: SPEAK YOURSELF” began in May of this year and has totaled 62 performances in countries and regions all around the world (North America, South America, Europe, and Asia). The tour will wrap at the Olympic Stadium in Seoul, South Korea and the concert will be captured live in front of a sold-out crowd at BTS’ penultimate tour date and aired just hours later that same day for U.S. audiences. Fathom Events is the only distributor in the U.S. with the capabilities to offer fans this exclusive opportunity. 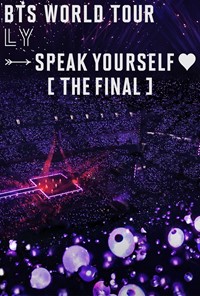